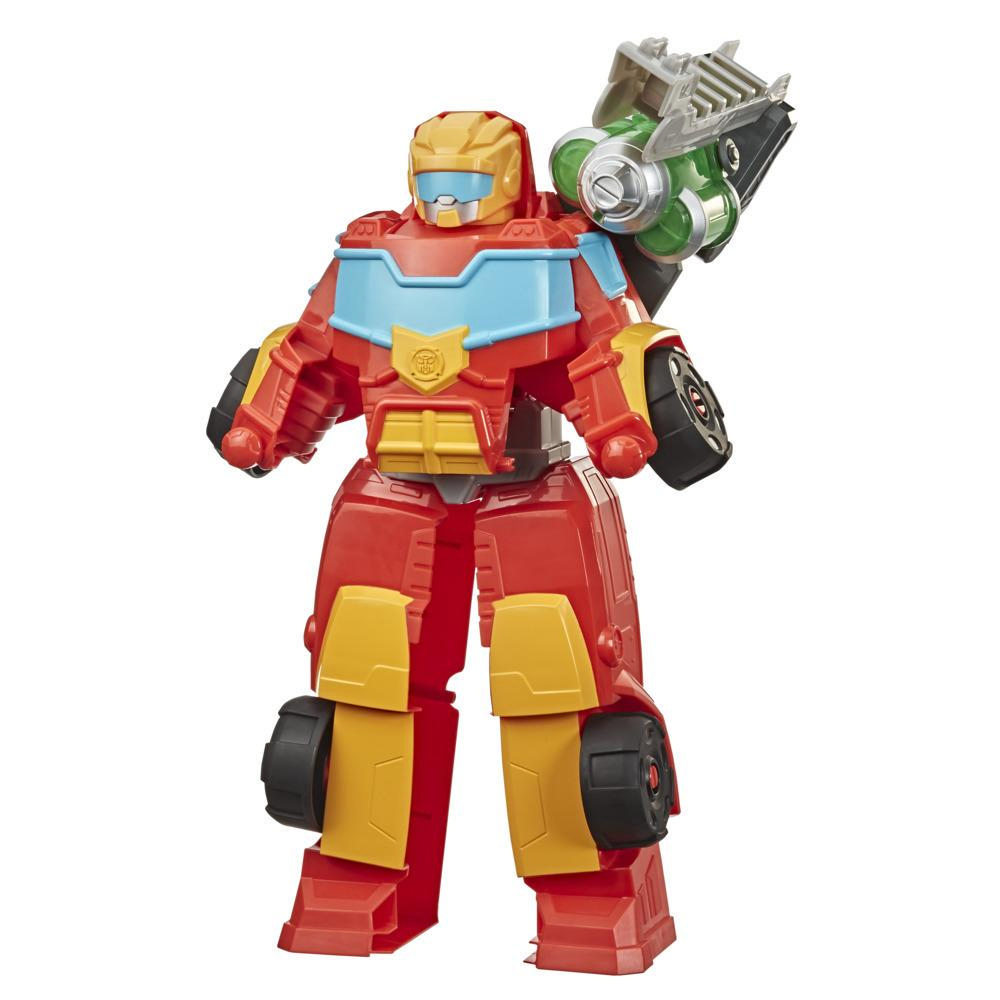 Chosen to become a Rescue Bots Academy trainee by Optimus Prime, Hot Shot is the hero of the team! Hot Shot can now take on his firetruck mode like his mentor, Heatwave the fire-bot!
Little heroes can imagine going on daring missions with their favorite Transformers Rescue Bots Academy characters! Designed with Easy 2 Do conversion, the Hot Shot toy converts from robot to vehicle mode and back again in 1 simple step! In bot mode, the Hot Shot figure features a fun, button-activated “Splash Blaster” rescue tool with lights and sounds and a posable ladder, inspired by the animated series. Splash blaster can be used in robot and firetruck modes. Preschoolers can pretend to race to the rescue with this 14-inch Transformers toy robot!
Also look for other Playskool Heroes Transformers Rescue Bots Academy figures to build a rescue team (sold separately, subject to availability).
Manufactured under license from TOMY Company, Ltd.
Transformers Rescue Bots is a trademark and copyright of Hasbro.

2-IN-1 RESCUE BOTS ACADEMY TOY: Little heroes can enjoy twice the fun with 2 modes of play, converting this 14-inch Hot Shot figure from a robot to a large firetruck and back again
AS SEEN IN THE TRANSFORMERS RESCUE BOTS ACADEMY TV SERIES: Kids can imagine racing to the rescue with this Hot Shot toy, inspired by the Transformers Rescue Bots Academy show
EASY TO DO: Designed with Easy 2 Do conversion preschoolers can do, this figure makes a great gift. With 1 easy step, kids ages 3 and up can convert this Rescue Bots Academy toy from robot to vehicle
RESCUE TOOLS: This Hot Shot converting toy robot features a button-activated splash blaster rescue tool with lights and sounds and a posable ladder, as seen in the Transformers Rescue Bots Academy animated series. Splash blaster can be used in robot and firetruck modes
COLLECTIBLE TOYS: Look for other Playskool Heroes Transformers Rescue Bots Academy toys to assemble a rescue team (Other figures each sold separately. Subject to availability.)

• Includes figure.
• Figure scale: 14 inches
• Ages 3 and up
• WARNING: CHOKING HAZARD – Small parts may be generated. Not for children under 3 years.